The betting limit for Marvel Comics jackpot slots is set at £5 per line maximum.

Every single Marvel Comics online slot game offers a breathtaking THREE progressive jackpots, while most of the games will also test you to the limit in tricky Bonus Round features. 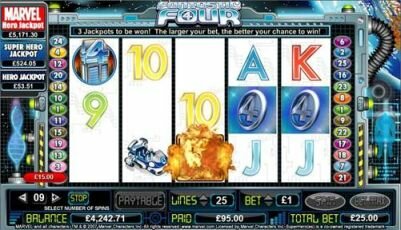 The exhilarating and complex Marvel Comics Fantastic Four slots game sees Mr. Fantastic, The Invisible Woman, The Human Torch and The Thing return to do battle against Dr. Doom yet again, as the Fantastic Four explode into action on your computer screen: prepare yourself for the awesome graphics – developed by CryptoLogic – whenever any of the Fantastic Four appear.

Play between 1 and 25 lines and bet between 1p and £5 per line to see what you can win. Prizes are awarded according to the Fantastic Four slots game Paytable (see below):

The Fantastic Four slots game from William Hill boasts a staggering five different Bonus Feature options. Choose whether you wish to tie knots around villains with Mr. Fantastic, smash up the place with The Thing, use The Invisible Woman’s stealth or simply ignite your day with The Human Torch, just make sure Dr. Doom doesn’t get you!